The ride currently scheduled for May 14 is, of course, the main event around which the entire trip is organized. My entire reason for going to Austria and Slovenia in May is to attempt the climb up the Loiblpass (Ljubelj from the Slovenian perspective) and survey the route that Mahler would have taken. In the Baedeker guide that Mahler used, there is a conspicuous mention of a “Gasthaus Deutscher Peter” which had already, at that time, been in operation for the preceding 500 years. I had always hoped that I might stay there, but it seemed impractical given its location so far from any public transportation. Once I decided to rent a car (and now I cannot imagine how I would do this trip without a car—certainly things like the Zoncolan would be out of the question), I immediately set to securing my reservation at Deutscher Peter. On the morning after riding the Zoncolan, I will drive with all haste to Maiernigg, where I will hopefully arrive in time to visit the composing hut, which closes at 2:00. After that, I will stretch my legs with a leisurely ride around the Wörthersee (another ride Mahler did—I would assume several times, but mentioned specifically by Bauer-Lechner on one occasion just before the Loiblpass ride). From there I will drive to Deutscher Peter in time for dinner.

The next day is the the big ride, weather permitting. (I have not yet decided what constitutes bad enough weather to warrant cancellation.) I’m still juggling a few options, but what is absolutely certain is that I will, as Mahler did, ride from Maiernigg to Bled (in Slovenia) as a single uninterrupted segment. If, as I am leaning towards, I make a single long loop coming back over the Wurzenpass and then via Villach and Velden to the southern side of the Wörthersee, then I will drive to Maiernigg and start and end my ride from there. My second option is to ride to Bled, ride around Lake Bled, and turn around, ride back over the Loiblpass from the Slovenian side (or through the tunnel if I’m too tired to contemplate the steeper Slovenian side after 80 miles of riding). If I take that option, which is shorter by about 20 km, I’ll start from Deutscher Peter, ride down to Maiernigg, turn around, then end my ride back at Deutscher Peter, thus avoiding any driving.

So much for the planning. I will save discussion of how all this relates to Mahler (you’ll have to buy the book), but for now here is some preliminary information about the road I will encounter, and which Mahler rode in 1900. I have recently discovered some excellent historical information about the Loiblpass road which has been collected by a museum in Tržič (the first town on the Slovenian side of the pass), some of which is displayed on a tourism site. I will be stopping by there on the following day.

The basic stats on the Loiblpass are not too frightening: 16 KM at about 6%. That puts it roughly in the same category as the eastern side of the Col du Tourmalet (same length, greater average gradient at 7.5%) or the southern (easy) side of Mount Greylock in Massachusetts (also same length, 4.5% gradient). But you don’t come to be because you want to know average gradients, so let’s dig a little deeper, shall we?

The most prominent feature of the Loiblpass is that it is divided into two distinct sections, with a small descent in the middle. The Baedeker Guide that Mahler used makes note of this as well, calling the first the Kleine Loibl. This is probably what accounts  for Mahler’s error in thinking that he was already to the top, when in fact he still had a considerable climb still before him. Mahler, of course, would have been climbing without the benefit of GPS, or even an odometer to give him an accurate sense of how far he had ridden. I can attest to the mind’s ability (even with those crutches) to over-estimate how long you’ve been climbing and to think you’re done when you really are not. And even if we assume that Mahler remembered that there was a “Kleine Loibl” from reading the Baedeker, he might have mistaken the small dip at the 2.5 KM mark as that point.

The stats for this section aren’t so different from the whole Loiblpass, obviously with the exception of length: it too has a short opening section, followed by a dip and then steeper finish. The first part, which climbs up to Unterloibl, is nothing to worry about, but long enough that it is also not easy. Were this climb in Rhode Island, it would probably be one of the hardest around. Though its profile is strikingly different, it is similar in terms of both difficulty, length, and average gradient to Tower Hill Road. That is a great training road, but not something anyone fears. The biggest difference is that the Loibl opening has a long stretch of ~8% where Tower Hill is obnoxiously inconsistent.

The real climbing starts on the other side of Unterloibl. Just on the other side of that town begins a 2.5 stretch of 10%, concluding with (likely) some ramps up to 20%. The entirety of the Kleine Loibl is just slightly easier and less steep than the western side of Lincoln Gap. Think about that for a second. Yes, the western side is much easier than the eastern, but having done it a few times I can attest to the difficulty of the “easy” side of Lincoln Gap. It’s hard enough that I wouldn’t want to do it with racing gears, even if I might just crack it with a compact and a 28 rear cog. Mahler would have ridden this on a single speed bike that would have been much heavier than any modern bike. My initial conjecture that it was unlikely that Mahler would have mistaken the Kleine Loibl for the whole climb now seems entirely plausible. Without metrics or an odometer, he would have been guessing his location solely based on landmarks in the Baedeker guide and his subjective sense of how far he had ridden. But riding uphill, even with metrics, has a tendency to mess with that subjective sense. I, for example, wondered if I had gotten to the top of the much easier Appalachian Gap even though I: 1. knew that it, like the Loibl, had a false summit, and 2. should have known that I had not gone far enough to be at the top yet, and 3. knew that it ended with a very steep section that I could not possibly have done.

Mahler thus likely crested the Kleibe Loibl, and shortly thereafter would have noticed some memorable landmarks that were listed in the Baedeker, like the Gasthof Deutscher Peter. At that point he would have realized with horror that he still had not just a little further to go, but more than half of the climb—and the steepest part to boot.

The next part of the climb starts just before the road passes Deutscher Peter. This is another nasty climb (but still on a main road, so nicely paved with a good amount of traffic):

It tracks 5% pretty closely for the first 3 KM, ending with a kilometer at 12%. That would be manageable were it not for what comes next.

600 meters before the Loibl Tunnel that leads to Slovenia, there is a small turn-off for a road leading up to the Loiblpass. The tunnel was built during WWII by inmates of the Mauthausen concentration camp (the museum in Tržič has a very nice virtual exhibit about the construction), and therefore Mahler would have taken the pass road. It seems to be little-used, and mostly by hikers. (At least one cyclist has done it, blogged about it, and describes it in frightening terms.) Since Austria doesn’t have Google StreetView, I’ve had little luck figuring out what the current road condition is likely to be, but I’m planning for the worst. My best guess is mostly gravel with some rocks and broken asphalt to make it even more fun. But even if the road were perfect, it’s still a steep, steep climb. 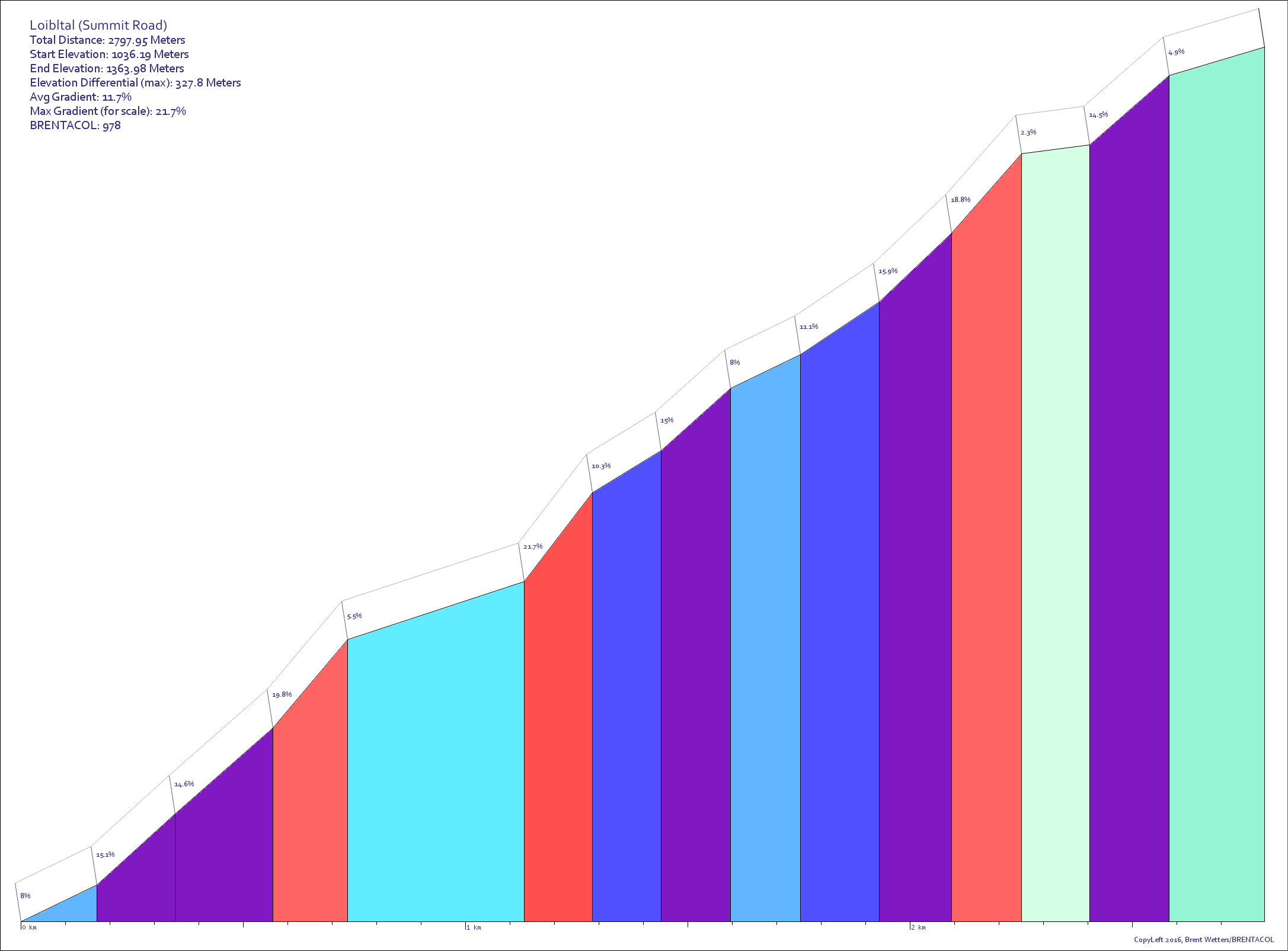 Almost 3 KM at almost 12%. It tracks quite closely with the last 1.5 miles (2.5 KM) of the hard side of Lincoln Gap. Bear in mind that the last 1.5 miles of Lincoln Gap is among the most feared stretches of road in the northeast, possibly the entire US. This is a road that many road cyclists will attempt without proper gearing or preparation and end up walking. Let’s just imagine trying to do that on a heavy singe-speed bike from 1895, and on gravel.

Mahler, according to the story, did not ride all of this section, but instead handed his bike to a boy on the side of the road, whom he paid to bring his bike to the top while he went cross-country. My best guess is that he would have left the road just after the second switchback on this road and tried to cut from there directly up to the pass, which should be visible from that point of the road.

The descent down the Slovenian side would seem to be even more difficult, and I have yet to decide if I’m doing this one (see above), but at the very least I’ll have to descend it. It’s steep enough that I’m working under the assumption that I’ll be walking much of this: 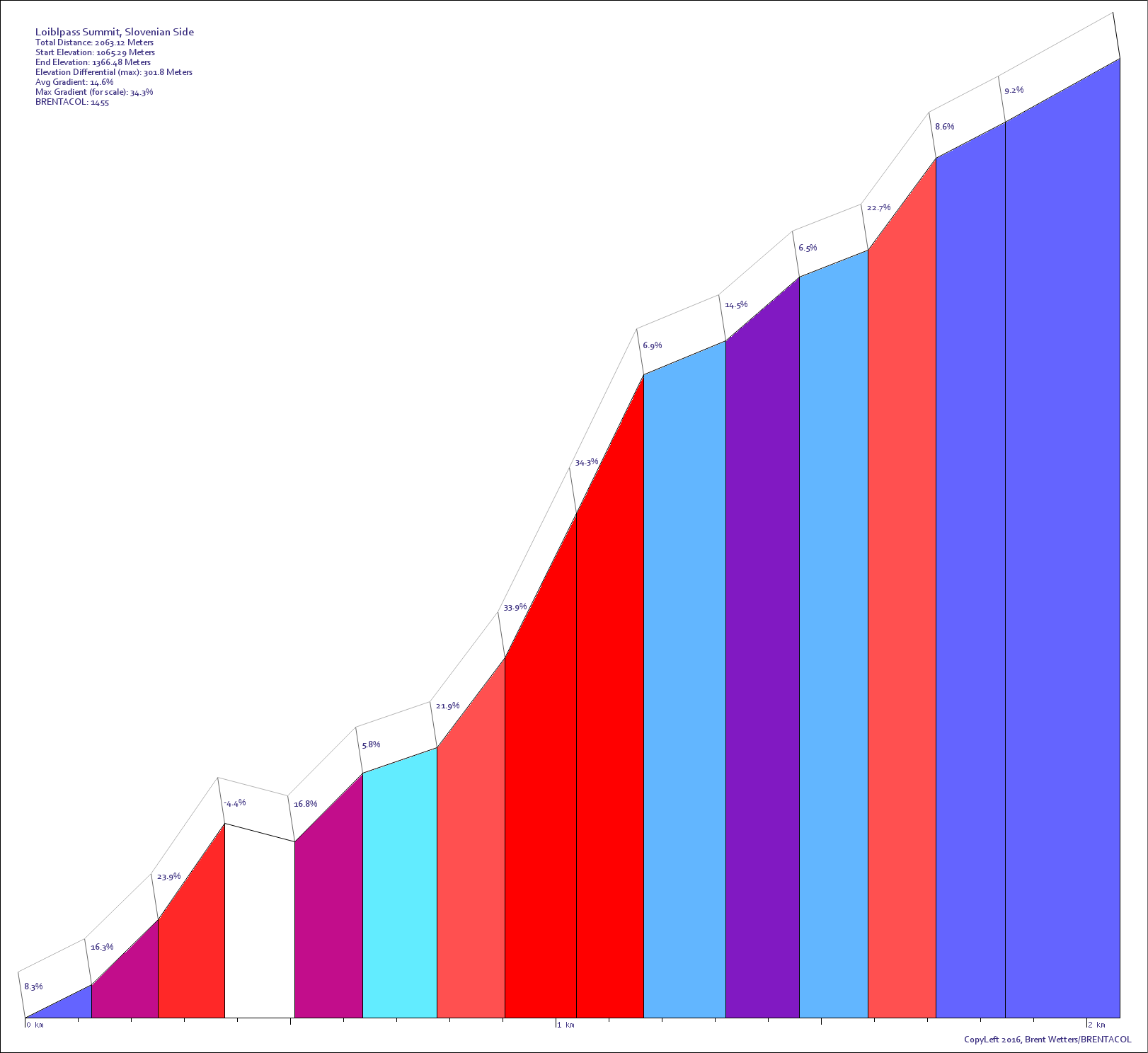 For what it’s worth, I have a little more visual information about this one, because there’s an annual race up this road on “old-timer” motor cycles. Of the many videos from the race available on youtube, this might be my favorite (you might want to turn your volume off or down before hitting play):