I think I may have just stumbled into a new Strava cheating method. The main reason I think this is cheating is the lengths that the user in question has gone to prevent me from being able to do anything about it. I am guessing (though I haven't reached out to anyone) that the same is true for others who have lost their KOMs to the same user. Here's a run-down of what happened.

A week or so ago, I got a notice that I lost my KOM on Staples Road, up in Cumberland. That I lost the KOM is not surprising. The only reason I have it at all, I think, is because it's a fairly obscure little climb. But I've lost KOMs before to things that are clearly either e-bikes or the result of leaving the Garmin on for the car ride home. So I usually check. But funny thing, when I clicked on the ride that beat me, I got the message "The selected ride could not be found."

Clearly it could be "found." It's clearly listed in the leaderboard. Then, when I click on the user, I'm taken not to the user, but to a shell of the user's page. 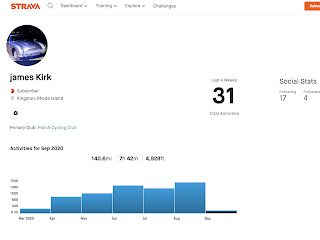 No option to follow, nor to request to follow. This is (correct me if I'm wrong) what you get when someone has blocked you. It would seem that Mr. Kirk has gone to quite a bit of trouble to make sure that I can't see his profile. We've never met nor interacted, so I can't think of any other reason he would block my account except that he doesn't want to be challenged on his KOM. I verified with a friend who is not on this particular leaderboard that his account and rides are visible to others:

So 24 miles with that much climbing in just over an hour (21.9 average) seems fast. But maybe he's a pro? It's possible, I suppose, but then why block my account from seeing him.  By blocking me, it removes all the options for flagging a ride as suspicious. The same rider has several very recent KOMs also in Cumberland, including Tower Hill Road. I'm nowhere near the top there, but let's take a look at that leaderboard: 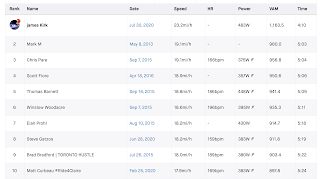 There are few climbs in RI that are more contested than this one. The Mark M. in second place is none other than Mark McCormack. (If you're reading this, Mark, are you blocked from James Kirk's account as well?) And here we see Mark's time of 5:03 by almost a minute and by 4 mph average. Notice how closely stacked all of the other times are. And there are some fast names in that bunch. I call BS. (But again, I have no way to flag it...)