Sunday morning, I got up early and left Manchester for North Adams, intent on finally getting back to do Greylock. Parke was the only one I was able to convince to come. The last time I did it (the south side) was 12 years ago, in 1998. This time I was planning on doing the North side. But first I had a little loop planned to go over to Kingsley Hill Road, reputed to contain the steepest half mile in the country. I didn’t pay too much attention to the terrain on the map I had chosen, and there was a lot of climbing before we even got there. First up was the climb out of North Adams on Route 2. We took a back route to get about halfway up the climb and then did the rest of it. A really nice, steady climb, if you can ignore the traffic, which I didn’t find too troublesome. From there, we descended Whitcomb Hill Road (which will be a great hill for another day, and headed towards Kingsley Hill Road.) The scenery along River Road is incredible, and you begin to feel squeezed by the steep, steep terrain on either side. Especially because of the realization that you’ll soon be taking a left to go up what seems like a cliff wall. 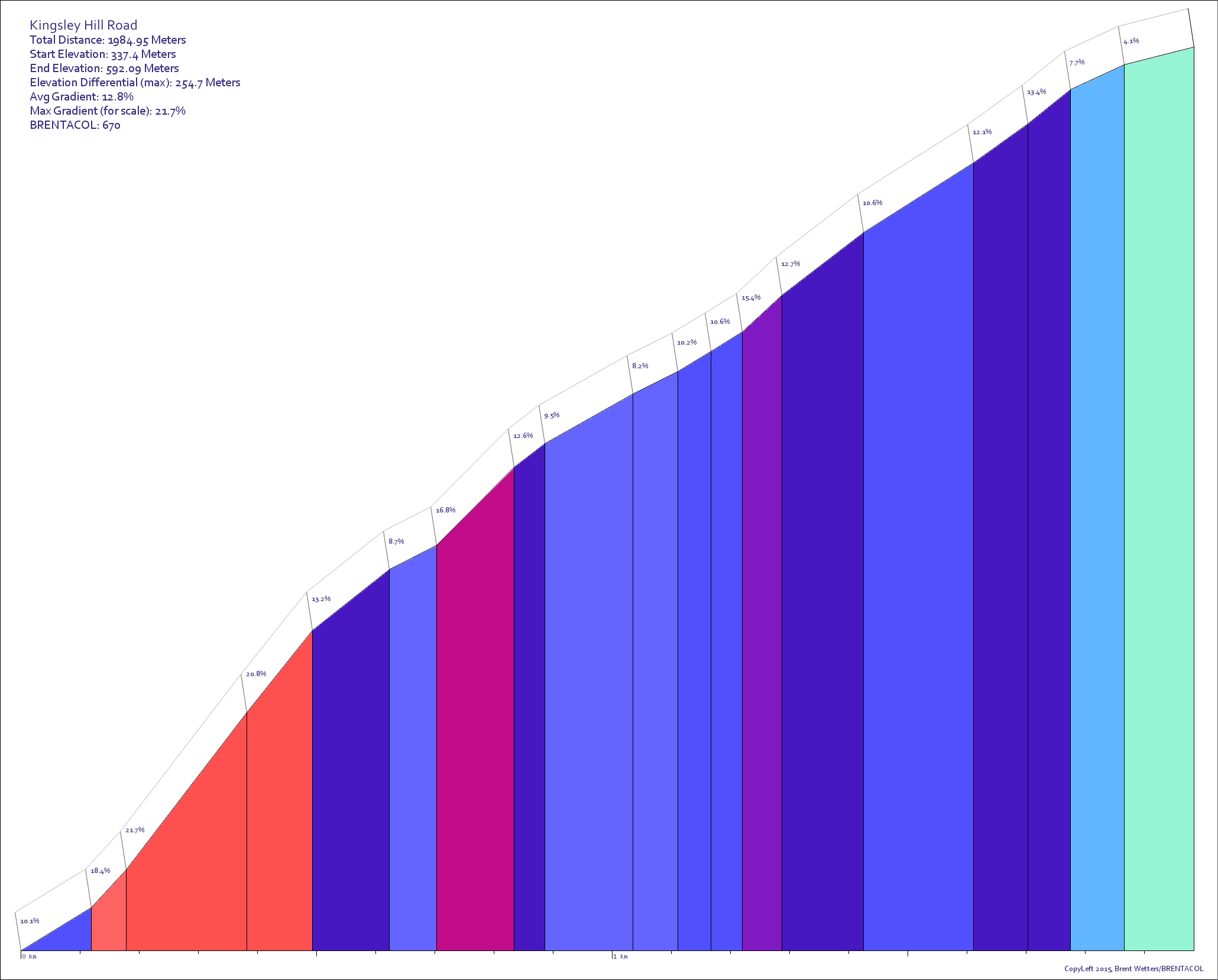 Kingsley Hill is as nasty as everyone says. The first section seems to go on forever. It’s wooded and a little curvy, so you can’t get a great idea of how much further until the gradient lets up. I was doing switchbacks (or snow-plowing, or whatever you want to call it) through a lot of this, but I made it up without stopping. Not sure what happened to Parke, but he was quite a ways back, and eventually I couldn’t even hear his cursing. I had a 34-29 as my low gear, Parke had a 39-27, which is really not sufficient for that kind of hill. After the steep part, it gets easier. But the steep stuff takes so much out of you, you really don’t get to recover until the top. It was also very hot and sunny, so just before the last section of steep (probably 12% or so) I cooled off a bit in some shade. and then went on to the top. Hoping that Parke hadn’t turned around and abandoned me in disgust for subjecting him to such torture, I went back down a ways and found him still cursing. He took a break at about the same point I did, and we rode together back up to the top. I’m not sure if he had to dismount in the steep section or not. From there, we went up Tilda Hill. On Doug’s site, he lists Tilda Hill in combination with Kingsley Hill. The whole thing is about 5%, so I figured Tilda Hill couldn’t be too hard. In fact, there’s a very long flat/downhill section, so you’re fully recovered from Kingsley Hill by the time you hit Tilda, and on its own, it’s actually a pretty tough hill.

Going down Tilda, my bike felt a little wobbly, which I chalked up to the road, which was pretty rough, so I took it easy while Parke sped off on the descent. Then back to the descent down Route 2. Again, Parke took off and I rode conservatively. SNAP! CLANG-CLANG-CLANG-CLANG. Fuck it. another broken nipple/spoke. and I wasn’t even pedaling. I dismounted, and discovered that i had snapped a spoke  about 2 inches from the hub. The wheel still spun reasonably, so I tried to secure the spoke and kept going. CLANG-CLANG-CLANG-CLANG. This time I was sure the entire wheel was exploding under me. Turns out, the spoke had just popped loose and was banging around again. this time I bent it sideways and threaded it between the adjacent 4-5 spokes. Seemed extra secure. Rode the rest of the way down without incident. Needless to say, we ditched Greylock, and Parke bought me lunch. Even without Greylock, we did about 5000 feet of climbing (in just 30 miles)…so not a bad day in the saddle.